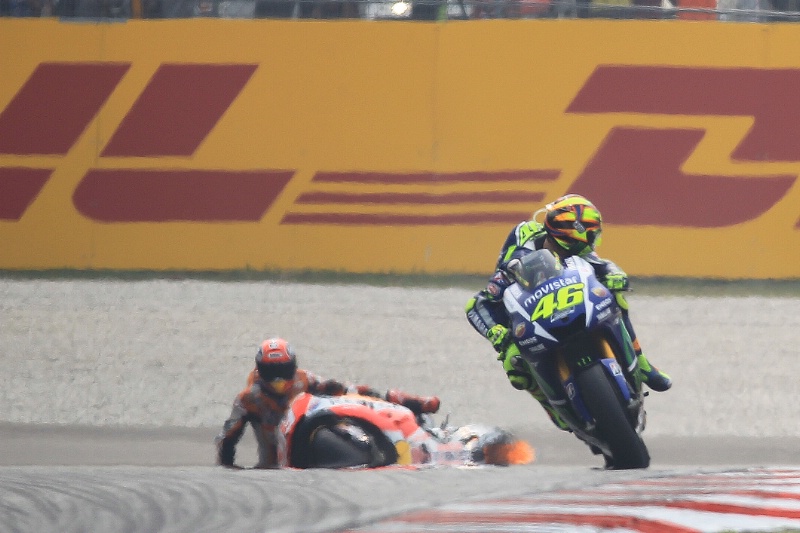 A petition calling for Valentino Rossi’s points to be restored after the Malaysian GP incident with Marc Marquez has gathered more than 300,000 signatures in the first 24 hours and sent the site into meltdown.

Who do you think is most at fault? Go to the end of this story and cast your vote.

Regardless of whether you support Rossi or Marquez over the incident, the controversy is bound to give MotoGP more publicity and spice.

The racing has been great this year, the championship close, the crowds huge and the extra publicity should make this one of the great seasons people will talk about for years.

GP racing has been fuelled with characters and tough battles over the decades, but modern MotoGP had fallen into the doldrums for a few years. The last bit of spice we had was when Vale and Max Biaggi had a dust-up on the stairs up to the rostrum.

Such controversy and hot-headed characters give the sport the attention it deserves and certainly makes it look more interesting than Formula One.

However, there is also a danger that the officials could spoil the series with their handling of the affair.

At least that is what Rossi fans believe and is the thrust of the petition which is published on change.org in English, Italian, French, Indonesian, Japanese, Dutch, Russian and Spanish.

We guarantee there aren’t too many Spanish supporters!

“You have just condoned dirty racing tactics by punishing Valentino Rossi for pursuing the championship whilst being harassed and sabotaged by Marc Marquez. At the same time you have allowed Jorge Lorenzo to overtake on a yellow flag, without penalty.

Petition founder and obvious Rossi fan Nicholas Davis of the UK says the sport “has an agenda that betrays riders and fans”.

Who do you think is at fault in this ugly saga? Cast your vote in the poll below.