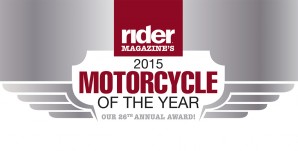 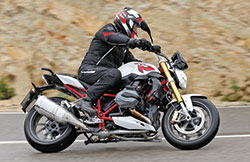 BMW R 1200 R
(March 2015)
Updates to the roadster include the liquid-cooled boxer twin, a new telescopic fork (to accommodate the radiator), a bevvy of standard and optional features (everything from riding modes to Dynamic Electronic Suspension Adjustment) and fresh styling. 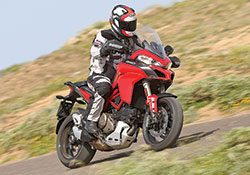 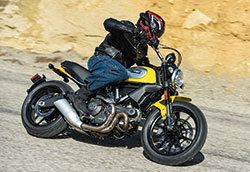 Ducati Scrambler
(March 2015)
Channeling the spirit of its Scramblers from the ’60s and ’70s, Ducati’s modern version is fun, affordable and powered by a feisty 803cc air-cooled L-twin. Choose from the standard Icon or three factory customs—Classic, Urban Enduro or Full Throttle. 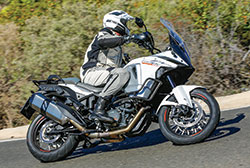 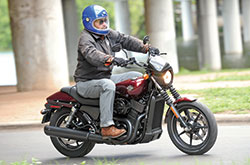 Harley-Davidson Street 500/750
(September 2014)
In need of a new entry-level bike for its Riding Academy, Harley created the light, agile, easy-to-ride Street 500 and 750, powered by the liquid-cooled, four-valves-per-cylinder Revolution X 60-degree V-twin. They’re affordable, too, starting at $6,799. 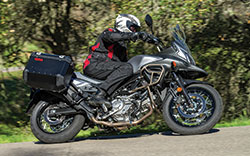 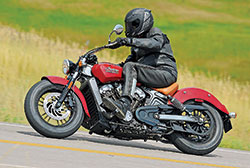 Indian Scout
(November 2014)
A year after the debut of its impressive three-model Chief lineup, Indian launched the all-new Scout, a compact, muscular cruiser powered by a liquid-cooled, DOHC, 8-valve, 60-degree V-twin that makes 100 horsepower at the crank. 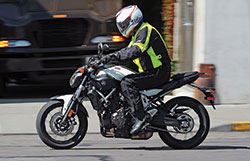 Yamaha FZ-07
(October 2014)
Hoping to repeat the success of its FZ-09 triple, Yamaha’s FZ-07 is smaller, lighter and less expensive. Powered by a torquey 689cc parallel twin that makes 68 rear-wheel horsepower, it weighs less than 400 pounds wet and costs just $6,990. 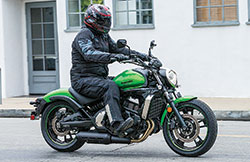 Kawasaki Vulcan S
(April 2015)
One size fits all with Ergo-Fit, allowing buyers to choose from three footpeg positions, three seat shapes and two handlebars at no cost at time of purchase. This light, frisky cruiser runs the same parallel twin as the Versys 650. 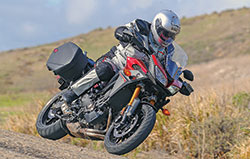 Yamaha FJ-09
(April, May, August 2015)
Based on the best-selling FZ-09, the FJ puts the same exciting in-line triple in a sport-touring package, with firmer suspension, a better seat, more legroom, a taller handlebar, a windscreen, standard ABS and TC, and optional saddlebags.

And the winner is… 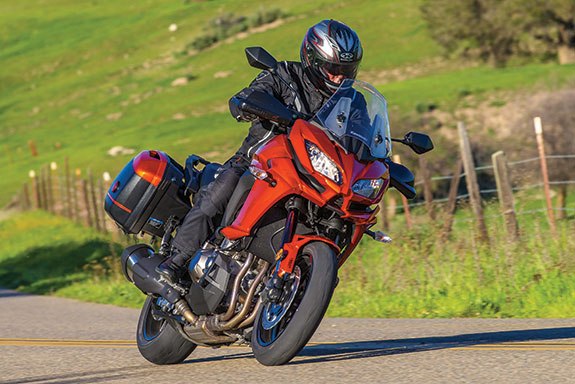 (April, May 2015)
When Kawasaki’s Versys 650 debuted for 2008, we didn’t know what to make of its unusual name (a mash-up of “versatile” and “system”) and quirky styling. But the Ninja 650-based machine’s back-road handling won us over, leaping through corners like an over-caffeinated gazelle. A liter-sized version based on the Ninja 1000 was launched for 2012, but only in Europe and Asia. Kawasaki thoroughly updated the Versys 650 and 1000 for 2015 (including all-new bodywork) and finally brought both to the U.S. It was worth the wait. 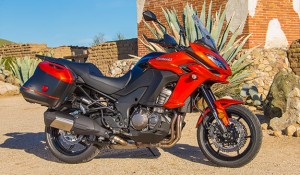 Part adventure bike, part sport tourer, the Versys 1000 LT is the best of both worlds. It’s tall enough for generous legroom and upright seating, comfortable enough for solo or two-up long hauling and powerful enough to satisfy our appetite for performance. Impeccably smooth with crisp throttle response and rheostat-like power delivery, its liquid-cooled 1,043cc in-line four sends 110 horsepower and 69 lb-ft of torque to the rear wheel. And its stout twin-spar aluminum frame, compliant suspension and excellent Bridgestone Battlax T30 tires give the Versys terrific on-road manners. Factor in standard features such as ABS, traction control, an adjustable windscreen, hand guards, 28-liter saddlebags and a centerstand, all for $12,799, and the end result is an impressive, all-around touring motorcycle that lives up to the “versatility” in its name.

The Versys 1000 LT beat the Suzuki V-Strom 1000 ABS and Yamaha FJ-09 in our comparison test because it offered the best performance, comfort, wind protection, saddlebags and value. But what makes the Versys truly special is how easily it won the hearts and minds of everyone who rode it.

Our congratulations to Kawasaki for the Versys 1000 LT, Rider’s 2015 Motorcycle of the Year!

Read about our award presentation here.
See a video of the motorcycle in action here.