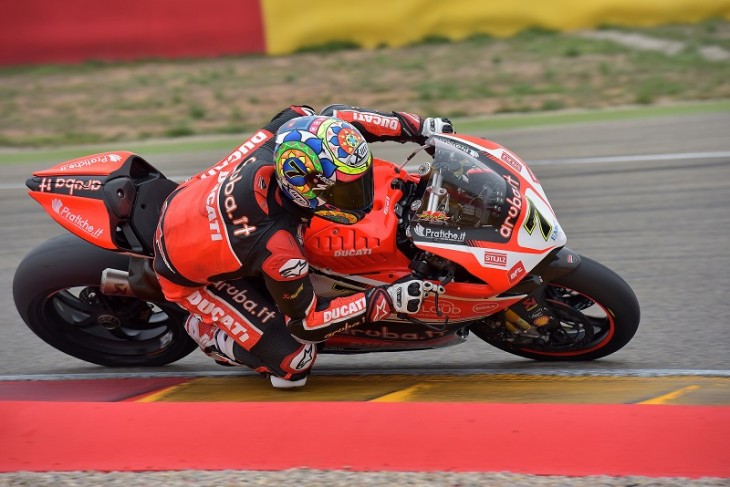 Aragón (Spain), Tuesday 17 November 2015 – The Aruba.it Racing – Ducati Superbike Team and its rider Chaz Davies have completed another two-day test session at the Spanish circuit of Motorland Aragón. Chaz Davies was joined on track this week by Xavi Forés.

The thick fog that blanketed the Spanish track for the duration of the tests limited the Italian team’s work, only allowing them to exit on track for three hours on day one and for little more than four hours on day two. Despite the reduced riding time, Chaz Davies and Xavi Forés were able to provide very useful feedback regarding the components tested.

While everything on Davies’ side of the garage was as normal, Forés’ squad saw the inclusion of two new technicians who will support Davide Giugliano during the 2016 season. Aligi Deganello (crew chief) and Paolo Biasio (electronic engineer) worked with Forés to adapt the Panigale, set up as it was for the Spanish rider during the final SBK round at Losail, to the Aragón circuit where Forés also raced back in April.

The outcome is, all in all, a positive one, with the team and riders having been able to complete more than half of the scheduled work, comfirming the improvements made to the electronics strategies and positively evaluating some suspension modifications that have improved the stability and precision of the Panigale R in its 2016 configuration. Chaz Davies completed a total of 71 laps over the two days, while Forés covered 98 laps.

The Italian team will next take to the track at Jerez de la Frontera from 25 to 27 November. For these final tests of 2015, the team looks forward to welcoming Davide Giugliano back to the garage; the tests will mark his return to the Panigale R alongside team-mate Chaz Davies.

Quotes at the end of testing:

Chaz Davies (Aruba.it Racing – Ducati Superbike Team #7)
“This test has been useful despite the weather, which caused us to lose most of day one and almost half of day two. Despite this, we’ve been able to test a lot of the new components with mainly positive results. So I’m pleased although we haven’t had time to 100% perfect all of the aspects. I wanted to make one final exit to really push hard but the weather put a stop to that too. I’m feeling confident and now we’ll focus on the next tests in Jerez, spurred on by the positive results seen here.”

Xavi Forés
“I’m happy with how these two days have gone, they’ve been positive and I’ve been able to complete my first kilometres of the 2016 season. It was a pity about the weather, as we lost a lot of precious time, but we’ve worked well and collected a lot of data and useful information. I was also pleased with the lap times because I improved on my best time set in the race. The new components that Ducati brought here have given positive feedback in terms of both the chassis and the engine. I thank Ducati once again for this possibility.”