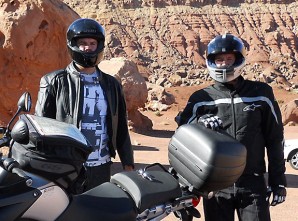 Like most motorcyclists, I get a sick feeling in the pit of my stomach every time I hear of a motorcycle accident. You know the tune—the traffic lady on the morning TV news reports that the “northbound lanes of Highway-whatever are closed due to an accident involving a motorcycle.” Each time I hear something like that, I repeat in my mind the old adage that there is no such thing as a minor motorcycle accident.

The truth is, my queasiness over such news has been compounded by the fact that I have passed my motorcycle obsession on to my son. This was not a big factor in his mid-teens when he was cutting his teeth on dirt bikes. Un-paved tundra makes for a more forgiving dismount, and you don’t meet distracted minivan drivers on the motocross course. He made it through his dirt years with no more than an occasional knee abrasion or cactus puncture in a forearm.

However, when he got his first street bike in his late teens, the fear began to grow. He was an around town rider and the acts of 4-wheeled stupidity that I had witnessed on our local streets provided fertile ground for my sprouting fear. At my insistence and by my example, my son never left the garage without a helmet and protective riding gear. But, as we all know, personal protection has its limits. Again, he made it though this period relatively unscathed. He had one low-speed, low-side which resulted in little more than a sore elbow and dented exhaust can on his Suzuki SV650.

Now my son is in his 20s and his 1200cc sport bike (which used to be mine) is often his primary mode of transport. My trepidation has grown exponentially with his increased mileage and thus his increased exposure to danger.

This got me thinking about the nature of parental worry. I was the first motorcycle rider in my family. Since the age of 12, I have spent as much time as possible on two wheels. Of course, my parents expressed consistent concern about my safety. Here in lies an interesting question. Were my non-riding parents more or less worried than I am?

They were not motorcyclists, so they had no idea how deeply the two-wheeled obsession can take root. They were also unaware of the state of raw speed and relative nakedness in which a motorcyclist exists. There can be great fear in the unknown, but on the other hand, maybe ignorance truly is bliss. My parents obviously shook their heads in the dismay that they could not dissuade me from riding. However, not being motorcyclists, they had no idea of the true risks and rewards of the lifestyle.

I, on the other hand, am fully aware of why my son rides. He shares my addiction. I can take comfort in the joy that the boy derives from motorcycling—because I understand it. However, I am more acutely aware than my parents were of the minute-by-minute, mile-by-mile risks of riding. Maybe there is more fear in true understanding. But true understanding brings with it a common bond of the concept of risk versus reward.

In the end, I have no idea if I worry more, or less, or just differently than my parents. I do know that I hold a substantial amount of the responsibility for why my son rides. However, even though it was surely I who infected my son with the moto-virus, I have also done everything in my power to instill the CE approved armor of maturity, proper riding technique and awareness of “the other guy.” I will take some solace in the fact that I have done my best to teach him to ride and think the right way. Still, when the traffic lady starts her report…