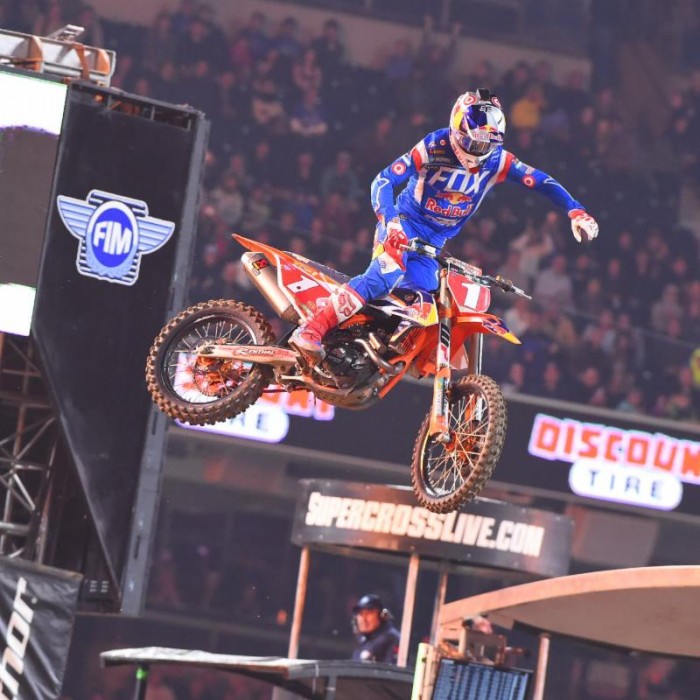 SAN DIEGO (February 13, 2016) – In front of 40,528 fans, the Third Annual Military Appreciation Race signified the return of Monster Energy AMA Supercross, an FIM World Championship, to Petco Park for its second visit of the 2016 season. For the fourth time in six races Red Bull KTM’s Ryan Dungey took the win with a wire-to-wire effort, one month after earning his first victory of the year in San Diego. In the Western Regional 250SX Class, Monster Energy/Pro Circuit/Kawasaki’s Joey Savatgy raced to his second win in three races to assume sole possession of the championship lead.

Dungey kicked off the 20-lap 450SX Class Main Event by edging out his Red Bull KTM teammate Marvin Musquin for the SupercrossLive.com Holeshot Award. As the field settled in, Dungey quickly opened a gap on the Team Honda HRC tandem of Cole Seely and Trey Canard. The top three went unchanged for the first half of the race until a battle for third began between Canard, RCH Soaring Eagle/Jimmy Johns/Suzuki Factory Racing’s Ken Roczen and Monster Energy Kawasaki’s Eli Tomac.

Canard was under pressure from both riders for several laps, but maintained his hold on the final podium spot until the start of Lap 11 when a slight loss of traction in the first corner allowed Roczen to gain the momentum and make the pass. Once out of podium contention, Canard engaged in a battle with Tomac and a hard-charging Jason Anderson, who pushed his Rockstar Energy Husqvarna Factory Racing machine to the lead pack after starting eighth.

Dungey went unchallenged to claim his highest win total ever at this point in a season, with Seely second and Roczen third. The defending champion has now posted 22 consecutive podium finishes and has not finished worst than second for 17 straight races.

“I just tried to keep the pressure low the entire Main Event; keeping good traction with the rear tire was key,” said Dungey. “I got a good start, which was huge in putting me in a position to win and I just tried to be consistent for all 20 laps. We had to overcome a few things today, but that’s racing. I’m happy to be back on top of the podium.”

For Seely it was his best finish of 2016, complementing his back-to-back third-place results to start the season.

“I’ve been in a funk these last two weekends, but I’m thankful for the dedication of my team to stick behind me. I feel a lot better on my bike,” said Seely. “I really didn’t make any mistakes, I just couldn’t quite keep the pace with Ryan [Dungey]. It feels great to get back up here [on the podium].”

Roczen’s third-place effort was his fourth consecutive podium result. He won his first race of the season last weekend.

“Tonight I have to be satisfied. I didn’t win, but I didn’t really feel comfortable on the bike today,” said Roczen. “We salvaged third. Ryan [Dungey] finished in front of us, but we’re leaving healthy with a good result.”

Dungey has earned 144 of a possible 150 points this season and now holds a 26-point lead over Roczen in the championship standings, one more than the 25 points available for a win at a single race. Anderson, who finished fourth, sits third, 33 points behind Dungey.

The 15-lap Western Regional 250SX Class Main Event started with GEICO Honda’s Jordon Smith claiming the SupercrossLive.com Holeshot Award, but it was Monster Energy/Pro Circuit/Kawasaki’s Chris Alldredge who moved into the early lead, bringing his teammate Savatgy with him into second. The Kawasaki duo looked to pull away, but Alldredge’s bike lost power just after completing the second lap, forcing him out of the race.

Savatgy assumed control of the lead but it wasn’t long before Yamalube/Star Racing Yamaha’s Cooper Webb, the championship co-leader with Savatgy entering the race, set his sights on the lead after taking over second. The distance between the lead duo continued to shrink until Webb’s front tire washed out on Lap 6, putting his Yamaha on the ground and dropping him to fifth. Webb’s misfortune allowed GEICO Honda’s Christian Craig, last week’s winner, to take over second ahead of his teammate Jimmy DeCotis.

Savatgy controlled the remainder of the race while Webb put on a torrid charge back to the front, passing Craig for second on Lap 12, where he would remain. Craig extended his podium streak to four in third.

It was Savatgy’s second career win, his first coming two races ago in Oakland, California, after Webb’s bike lost power while leading, resulting in a 21st-place finish. It was that same race where Savatgy first took over the points lead.

“I just tucked the front end. Just a mistake by me,” explained Webb. “I was able to get up and not lose too much time. It was early in the race so I was able to get those spots back. I just need to stop crashing.”

Savatgy moved into sole possession of the points lead and now holds a three-point advantage over Webb. Craig is third, 16 points out of the top spot.

The 2016 Monster Energy Supercross season continues next weekend with the championship’s annual visit to Arlington, Texas, and AT&T Stadium on Saturday, February 20.