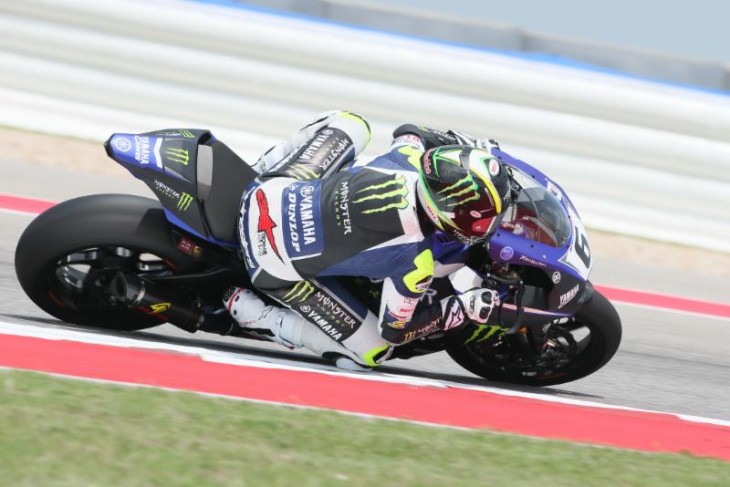 MotoAmerica Superbike Champion Cameron Beaubier will be among those testing at the Circuit of The Americas. The test is open to the public. Photography by Brian J. Nelson.

COSTA MESA, CA, FEB. 15 – MotoAmerica has announced the schedule for the upcoming MotoAmerica Preseason Test powered by Dunlop at Circuit of The Americas, March 23-24, a two-day test that will be open to spectators for free.

The test is to prepare MotoAmerica teams for the opening round of the 2016 MotoAmerica AMA/FIM North American Road Racing Series at COTA, April 10-12. The MotoAmerica round will be held in conjunction with the 2016 Red Bull Grand Prix of The Americas.

Testing will get started on the first day at 8:30 a.m. with Superbike and Superstock 1000. From there the sessions alternate between 1000cc motorcycles and the Supersport/Superstock 600s with four 50-minute sessions before the lunch break. Day two of the test will also begin at 8:30 a.m., but will begin with the Supersport/Superstock 600 machines before alternating back and forth with Superbike and Superstock 1000.

The lunch break will provide race fans and media the chance to participate in a rider/team Q&A session at the track each day. The Q&A sessions will be held on both days from 12:50 to 1:10 p.m.

Two-up rides will be given to members of the media from 12:30 to 1:20 p.m. on both days with Superbike racer Chris Ulrich at the controls of the two-seat Suzuki GSX-R1000.

The track will again be hot starting at 1:30 p.m. on both days with the sessions again alternating between classes in 50-minute sessions.

The Hot Pit Lane Walk presented by Dunlop will take place on both days starting at 5:45 p.m. with fans getting the chance to walk down hot pit lane and see the behind the scenes activity that goes on behind the garage doors during a test session.

“I think the fans who come out to COTA are really going to enjoy the experience,” said MotoAmerica President and three-time 500cc World Champion Wayne Rainey. “The test is always like the first day of school with everyone getting back together again after the off-season. It will be fun to have the fans included in that. I also think they will enjoy the opportunity to interact with the riders during our Q&A sessions.”

The Red Bull Grand Prix of The Americas, April 8-10, will host the world’s premier motorcycle racing championship, MotoGP, and will be complemented by MotoAmerica, with the race weekend featuring the third round of the MotoGP World Championship and the opening round of the MotoAmerica season. Guests of all ages will enjoy non-stop action as riders battle for position and reach top speeds of over 210 mph. Tickets start at $39 for single-day tickets. Camping, hospitality packages, and discounts for large groups and military members are also available. For more information visit circuitoftheamericas.com/motogp16 or call 512/301.6600.