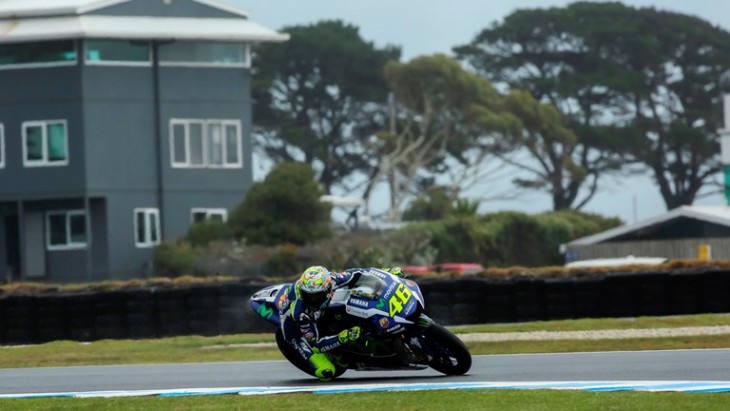 Energized from the good results at the previous test two weeks ago, Movistar Yamaha MotoGP’s Valentino Rossi and Jorge Lorenzo headed to Australia eager to benefit from the data collected in Sepang for the second official three-day pre-season test. However, when they arrived at the Phillip Island circuit this morning, the wet and changeable weather conditions prevented the teammates from carrying out their testing as planned. They finished today’s session in sixth and sixteenth place respectively.

The Movistar Yamaha MotoGP team was up for the challenge today of repeating their strong ride of two weeks ago as testing kicked off at the second Official MotoGP Test in Australia, but mixed conditions allowed for only limited time on the Phillip Island track.

After two hours of waiting for the weather to improve, the 2016 MotoGP test at Phillip Island finally got underway for riders Valentino Rossi and Jorge Lorenzo, who used the track time wisely and focused on trying out the Michelin rain tyres and the electronics in damp conditions.

Though the weather was less than ideal, Rossi didn’t let the opportunity go to waste to test his two Yamahas – the model closer to the 2015 YZR-M1 and the 2016 edition – on a wet track. Despite the brief windows of dry track time he worked diligently throughout the day and set 27 laps in total. Known to be an expert when conditions get tough, he set a fastest time of 1’33.088s at the end of the session when a sudden dry-spell in the final hour saw him dash to sixth place.

Lorenzo also had a productive day. He was the first of the teammates to come out of the box and steadily increased his pace as he got acclimatised to his Yamaha on the damp Australian track. He was in sixth place at the end of his two hours on track until rays of sunlight broke through in the afternoon, signaling that it was time for the Spaniard to kick up the pace a notch. He set a 1’39.825s to take third in the provisional ranking before rain put a halt to the action again. Lorenzo returned to the track for another stint later in the afternoon, completing two laps on a slick tyre in dry conditions to bring his total to 24 laps, but chose to end the session early and completed the day in 16th place.

“The conditions today at the track were not what we had hoped for, but it did give us an opportunity to source new data for the wet, so we still got something useful out of this day of testing. The riders focused on getting familiar with the wet Michelin tyres and the electronics in these damp conditions and they gave good feedback. At the end of the day a dry line started to form and we were able to get some dry laps in, but the feeling of the riders was not what we expected. Tomorrow we hope for longer dry sessions so we can carry out our testing plans as scheduled and fix any unsettled feelings that they experienced in dry conditions today.”

“It’s very positive to come here to Phillip Island, because we have a lot of different things to try, especially tyres and we know this track is always very demanding for the compound. Unfortunately we expected summer, but it’s winter. Today the season changed a minimum of ten times, we had to wait a lot and it was quite frustrating because it was important to do some work, but we didn’t do a lot of laps. We were able to do some wet laps and also some dry laps at the end. We hope that tomorrow and Friday the weather will become better. It’s always difficult to find the right window to use the intermediate tyre, but it can help. In the past, with the slick, it was quite dangerous to go out in half and half conditions. I think this year we can use the time more effectively, but here in Phillip Island the feeling with the bike and the tyres changed a lot compared to last year, so we need to work; every track can be different.”

“It was a very unfortunate day. We are here in the summer and, as we can see in the Superbike race, there’s usually good weather, but today we’ve been unlucky. Mixed conditions; not really wet and not really good conditions for riding and there were not many minutes to try in these conditions. It was especially important to test the new electronics on the wet to get settled a little bit. I did only two laps on the slicks and had very strange feelings. I’m really looking forward to see tomorrow, with a complete day of good conditions, how the bike is working with the Michelin tyres.”

Bradley Smith and Pol Espargaro started the first day of testing at Phillip Island confidently as they powered on despite the rain falling intermittently throughout the day. Even though the damp weather disrupted the testing plan, it allowed the Monster Yamaha Tech3 Team to gather valuable data and also test the new wet Michelin tyres as they prepare for the forthcoming season.

Bradley Smith got straight to work and keenly set about experimenting with the electronics and the setup, which he established at the Sepang test, before completing 27 laps, as he finished the day strongly in third and just one tenth back from second place. Whilst Pol Espargaro, continued his efforts for the impending season as he used the weather to build confidence with his wet setup. The 2013 Moto2 World Champion undertook a total of 20 laps and set his fastest time on his final run which left him just half a second back from his teammate and confident of improving tomorrow with dry weather conditions expected.

“To be honest I’m quite pleased with how today went. It goes without saying that the weather interfered a bit, but it was actually quite positive because it meant that we could really focus on the small details whilst we were waiting for the rain to stop. The electronics take a lot of time to adjust, so having some big breaks due to the weather meant that we could do this and there was no stress or rushing. When I went out onto the track, we knew that we only had a handful of laps and I had to really concentrate so that we could narrow down the right choice of setting. The good thing is that I have quite a positive feeling already, even if it’s only after 7 or 8 laps in the dry, which is very important as I struggled here all weekend last year. In addition, I really enjoyed myself in the wet and had a lot of confidence riding in it, which is a big plus. It looks like the base setting that we worked towards in Sepang is performing well here already, albeit with a few small adjustments. This proves that we are heading in the right direction at the moment and hopefully tomorrow we can gain more valuable information with some dry laps.”

“Today, we can’t really say how the test went because neither me nor the other riders really lapped a lot in the dry or the wet conditions. We all rode only a few laps and the times were really far back from the pace that we should be riding at. However, I had a satisfying run in the wet as we tested some electronic settings, yet unfortunately we weren’t able to re-confirm the information that we gained as the track began to dry. Almost the exact same thing happened when I went out on slick tyres and I had to come back in the pits after only a couple of laps. It’s a real pity that we couldn’t make more of today, but the forecast says that the conditions should improve tomorrow, so I’m looking forward to getting back on my bike and finally enjoying this amazing track.”