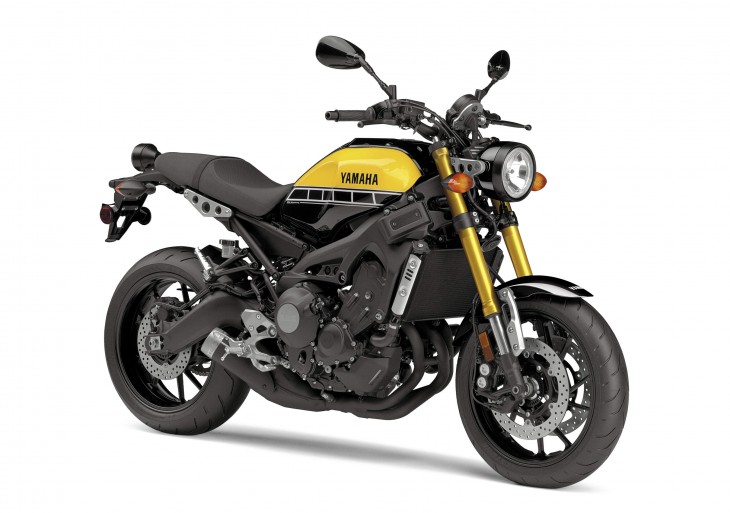 When Yamaha announced the retro-inspired the XSR900, we thought the styling was pretty cool (particularly, the 60th Anniversary Yellow & Black model pictured above). We didn’t expect a big price hike over the model on which it is based (the FZ-09), however. That didn’t turn out to be the case, as Yamaha is pricing the XSR900 at $9,490 for Matte Gray, and $9,990 for the Anniversary model. For comparison, the FZ-09, which is functionally the same bike, is priced at $8,190.

Together with pricing for the XSR900, as well as the FJR1300A and FJR1300ES, Yamaha announced the remainder of its 2016 models. Here is the full press release:

The TMAX returns for 2016 in a striking, new Platinum Gray color. Featuring a powerful 530cc, liquid-cooled, fuel-injected, DOHC, twin-cylinder engine, the TMAX is fuel efficient while also producing excellent acceleration and power for highway riding or commuting. With its Continuously Variable Transmission (CVT) that eliminates the need to use a hand clutch or shift gears, operating the TMAX is easy.

Stylish LED headlights, front cowl, front fender, mirrors, and instrument panel all combine to give the TMAX cutting-edge styling and a sporty appearance, while advanced upside-down 41mm front forks and radial-mount front brake calipers deliver sportbike-like performance. For unmatched convenience, a Smartkey system makes turning the TMAX off-and-on as easy as pushing a button, and also operates the seat and handlebar lock mechanisms. And, for even more convenience, a handy 12-volt outlet is standard on the TMAX.

The 2016 TMAX MSRP is $10,490 and it will be available in dealerships beginning in late February.

The Zuma 125 has been updated for 2016, featuring new off-road-inspired styling, improved fuel economy, an upgraded rear brake and suspension, roomier ergonomics, enhanced storage, and even more convenience. Beneath the sleek new styling, the Zuma 125 is built around a strong steel frame with fat, aggressive tires on new cast aluminum wheels. Rugged front and rear suspension, along with protective brush deflectors and fork tube boots that further emphasize the off-road styling, make the Zuma 125 capable of riding on varied road surfaces while delivering plenty of attitude for daily commuting.

Powering the 2016 Zuma 125 is a compact, 125cc, four-stroke, four-valve engine with a ceramic-composite cylinder liner and electronic fuel injection, which delivers modern reliability and economical performance. With an estimated 103 mpg average and a 1.7-gallon fuel tank, you’re sure to get plenty of fun-filled miles before re-fueling.

The fully-automatic, V-belt transmission and push-button electric starting make the Zuma 125 super-convenient transportation. Standard center and side stands, along with a locking cover on the ignition switch, make it easy and secure to park. There’s room for two atop the Zuma 125’s seat, plus lots of locking storage beneath it, while the step-through floorboards make getting on and off a breeze.

The 2016 Zuma 125 will be available in two colors, Radical White or Ultramarine Blue, with a MSRP of $3,390 and availability in Yamaha dealerships beginning in March.

The YZF-R3 features Yamaha supersport-inspired styling with a full fairing in a chassis design that works for both first-time and experienced sportbike riders who prefer a lightweight, nimble machine. Clip-on handlebars provide a great balance of comfort while maintaining a sporty riding position, and the flat seat design with a height of only 30.7 inches inspires confidence, especially for beginning riders.

The 2016 YZF-R3 will be available in three color schemes, Team Yamaha Blue/Matte Silver, Matte Gray, and Intensity White/Rapid Red, and arrive at Yamaha dealerships beginning in March with a MSRP of $4,990.

The 2016 FZ-07 Armor Gray model will have a MSRP of $6,990, the same as existing Raven and Matte Silver models, and will be available beginning in late February.

Similarly, the 2016 FZ-09 Armor Gray model will have a MSRP of $8,190, the same as existing Raven and Impact Blue models, and will be available beginning in late February.