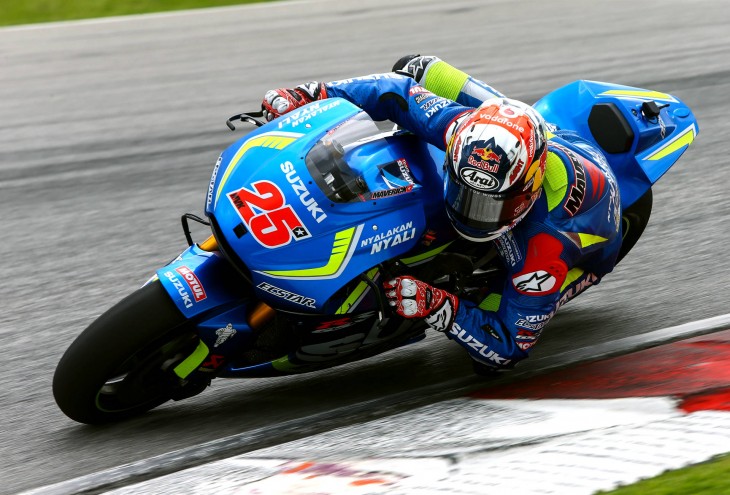 Suzuki is one of two teams (Aprilia being the other) still receiving concessions compared to its MotoGP competitors for the 2016 series. The concessions are a bit different this year, however, with all teams using the same tires and the same fuel capacity. Instead, Suzuki and Aprilia get 9 engines per rider (versus 7 per rider for the other teams), unlimited engine development (other teams are frozen as of the first race), and unlimited testing, including with factory riders (other teams get a total of 5 days).

At the recent Sepang test, Suzuki began testing a number of significant changes for 2016, including a new engine, chassis and seamless gear box. It appears the new engine is much more likely to offer competitive power this year and, together with the seamless gear box, much better acceleration off the corners. The jury is still out on the 2016 chassis, however, and Suzuki (like a lot of the other teams) still has plenty of work left dialing in the electronics. Pre-season testing resumes at Phillip Island on February 17.  Here is what the Suzuki team had to say after the Sepang test, followed by a short video:

Team Suzuki Press Office – February 3. The third and final day of the Sepang test saw rain complicating the program with early morning showers and another downpour after lunch splitting the day into two intensive sessions for Team SUZUKI ECSTAR.

However, Aleix Espargarò and Maverick Viñales could lap to almost complete the remaining part of their program, therefore collecting useful data for the engineers and they both now have a complete scenario of the available evolutions of the GSX-RR in terms of chassis and engine, together with some improvements in the electronics.

The riders will now fly to Japan to meet the R&D team in Hamamatsu and to complete some further tests in the wind tunnel that will help designers and engineers to further finalise the aerodynamics. The program will then take the whole Team to Phillip Island, Australia, for the second session of IRTA tests where the Team SUZUKI ECSTAR crew will be joined by Test Team rider Takuya Tsuda, who will also use the new type of seamless gearbox.

“Today we completed the first test in the New Year for the upcoming season and in fact these three days were very useful to verify our progress. We have introduced many new items from the Factory, such as new engine specs, new electronics improvements; and a new chassis, with positive outcome. It seems that the new engine specs and the seamless gave positive feelings to the riders and also a good improvement to the lap performance; obtaining a more-effective acceleration. We still have to work on the electronics and chassis, since we have some trouble with rear grip. Here we also introduced a new chassis, but apparently we need some more testing and development to make it more effective. The test in Phillip Island will help us in this way.”

“After today I must say that I am really confident. The first two days didn’t leave me feeling so easy, but today, especially after the last two hours of testing, I would say I feel good. Today I could be performing both on a single lap and on the pace, although we have rolled only with hard tyres. We also had some troubles but it is normal since we are at the first test with so many new items. We did some improvements with the electronics but we still have room for improvement, if we will find a good way to interpret it we will be much closer to the top. There are some riders who really made the difference here, but also some other Factory riders who are not so far from us. I had really good impressions from the seamless but also importantly I feel happy with the new engine. We still need to better finalise the electronics to exploit its full power, but already at this point the power delivery and overall power makes me very happy. Now we go to Australia, Phillip Island is a track I like a lot and will be in summer, so there will be a lot of grip. The conditions will be very hot and we were pretty competitive there last year, it will be a good chance to test more things even though we know that the places where we have to improve on are those like in Malaysia, with less grip.”

“Today it’s been a difficult day because of the rain but I also had some positives. This morning we used the new engine with 2015 chassis and I had very positive feelings. We were very competitive and close to the top. In the afternoon we switched to the 2016 chassis but I couldn’t find a proper feeling, we need more testing to find a more effective configuration. At the beginning I would have liked to have continued with last year’s, but we must keep in mind that we are here for testing all news things and to send feedback to Japan so that they can further improve. The new chassis is still young, it’s normal it has some troubles and we need some more time to finalise it. I feel we have made positive improvements with the seamless and the electronics, as well as with the tyres. The confidence with the front-end has improved a lot and also the corner speed is faster. This was only the first real test, it’s true that we have had some troubles, but it’s part of the game and this is exactly the purpose why we are here. Tomorrow we fly to Japan to do some testing in the wind tunnel, they will probably help me to find better protection from the air since I am a pretty tall rider; and then we go to Australia where we will still have many things to try. The Factory is working really hard to deliver us improvements and updates, we keep working on pretty much all aspects; chassis, engine, gearbox, electronics and there is much room for improvement, but I feel totally positive about this.”