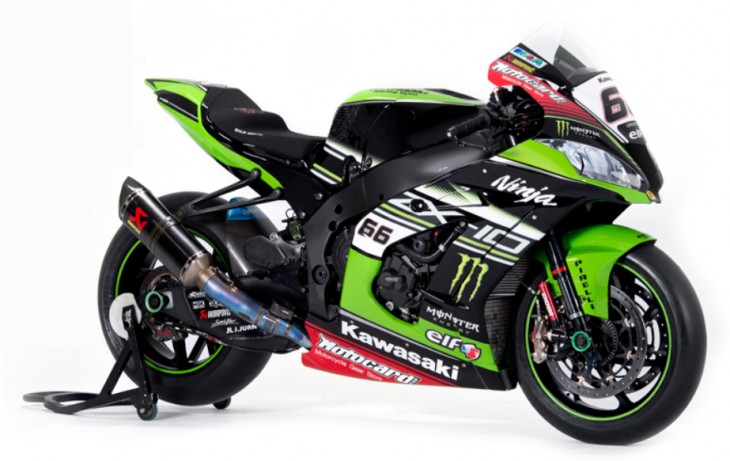 Irvine, Ca  (February 11, 2016) – The FIM Superbike World Championship Kawasaki Racing Team has been abuzz this off-season with championship cheer and the unrelenting pursuit of speed. The first glimpse of their efforts was revealed today in Barcelona as the team unveiled their 2016 Ninja® ZX™-10R. Team Manager Guim Roda played host to the world as the unveiling was broadcast live via the web and Kawasaki’s social media channels. You can find a replay of the event here; http://kawasakiracingteamworldsbk.com

Jonathan Rea, the 2015 world champion, stated: “Of course I feel the pressure because we made an incredible season last year. I went away after the final round, I had some weeks at home, and then there was the birth of our new baby boy. That gave me some weeks to relax. I needed to find some more deep, extra, motivation to come back and not aim for top three again but defend my position as world champion. I started my pre-season preparations earlier than in 2014 or 2015 and I am already in good shape. We have our hands on a new ZX-10R, which I am really excited about. The best way to approach our season is the same step-by-step way as we did in 2015. I am excited to start the season and we do not have to wait too long. I am excited to start, excited to race and to try and defend my championship with the best support in the world.”

Tom Sykes, the 2013 world champion, stated: “I am very excited and motivated. Last year was a setback for me and the guys around me. Having said that, I am very blessed because I have certainly got the best people around me. Come rain or shine, and even on the difficult days, the guys patted me on the back. They know I give 100%. Likewise they always give their best. If you had a difficult season and still finished third in the championship it is also not so bad. Kawasaki has given me another fantastic tool; the new 2016 Ninja ZX-10R is absolutely fantastic. It is a bike I am very familiar with. It is a bike that feels almost replicated from our 2012, 2013 and 2014 development. The first laps were very exciting and from there on it just got better. Things have come easier for me and the lap times are already impressive and there is still work to be done. I definitely feel that with big help from the people around me, Kawasaki and all our technical sponsors we have the best chance and best package on the grid. Given the form we have had in recent testing this pre-season I cannot wait for it to begin.”