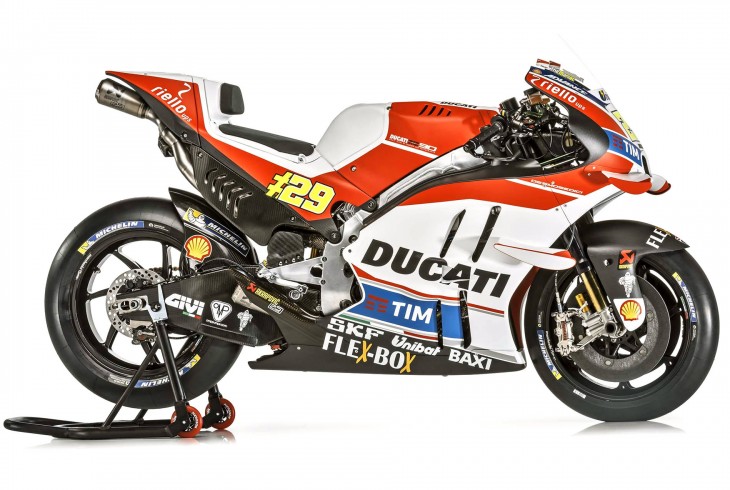 Score one for Ducati. With naysayers expecting Ducati to be down on power as it transitions to equal footing with Honda and Yamaha in MotoGP this year (i.e., no extra fuel or engines, and no in-season engine development), Ducati proved them wrong in Qatar with impressive top speed on the long straight. Indeed, Andrea Ianonne broke the MotoGP top speed record with radar catching him at 218.2 mph!

Since engine development is frozen for everyone except Aprilla and Suzuki, Ducati would appear to have a power advantage for the remainder of the year. But is that power usable, and offer good grunt out of corners? According to Casey Stoner, the answers are yes and yes.

Crash.net quotes Stoner following his post-Qatar private test as having this to say about the Desmosidici GP16 engine performance: “It’s very, very quick!” Stoner said during his private test at the same Losail circuit on Monday. “It’s something fantastic – we’ve got a very fast engine, very rideable with great torque. It’s a complete package.”

Stoner went on to say that development focus will be on other areas this year, but Andrea Dovizioso’s performance in the Qatar race (where he finished second) indicates Ducati’s handling, including corner speed, is already at a high level. Dovizioso and Ianonne (who crashed out at Qatar while running near the front) might have a bag full of podiums coming their way this year. We can’t help but wonder how Casey Stoner will do on the GP16 if he chooses to race as a wild card once, or more, this season.