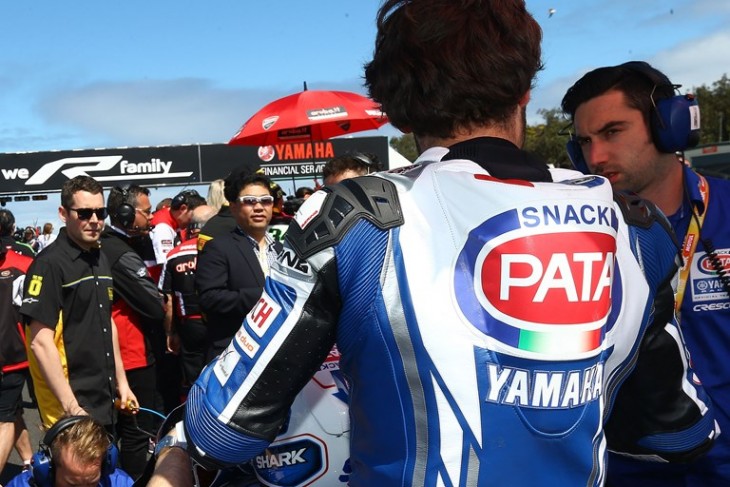 At 31 years of age, Dale Meech has worked for Crescent Racing since he was 15 – across both national and international competition. Advancing from assistant technician through to lead mechanic, his 16 years with the Dorset based outfit have seen him take on many responsibilities including engine building and the role of Crew Chief to Jon Kirkham in 2011. 2016 provides Meech a new challenge as the Pata Yamaha Official WorldSBK Team’s Technical Co-ordinator so Yamaha Racing caught up with him to find out how the new role has evolved and get his opinion on the first two rounds of WorldSBK competition with Alex Lowes and Sylvain Guintoli.

Dale, your role within the team has developed greatly throughout your race career, what duties does your current job consist of and what is a typical race weekend for you?

“This year my role has changed from primarily being ‘on the tools’ as a technician, to the general organisation of all technical aspects of the Pata Yamaha Official WorldSBK race team. From logistics co-ordination, freight organisation and management, to ensuring we have the correct parts, spares and bodywork in the right quantities at all times. I liaise with Paul and the Crew Chiefs to arrange the team work schedule, both trackside and back at the workshop, and am always on hand to assist with bike preparation, maintaining the spare bikes and any last minute technical work that may be needed during sessions at a race weekend. In racing there isn’t really a ‘typical’ weekend so it’s more about being prepared for any eventuality, being aware of local manufacturers and suppliers, especially with the amount of travel undertaken in the world championship, so you can just jump on any issue and solve it, from wherever you are. We have a base schedule to work from but you always have to try to plan for ‘that something’ that’s about to catch you out!”

You have worked in both BSB and WorldSBK, in your opinion what are the main differences between the two championships?

“The main difference from a work perspective between the two series is that WorldSBK is more ‘set’ and the schedules are very similar for every event that you go to, whereas the British Championship tended to have the odd change and the times would be quite tight. Regarding the bikes, the rules don’t tend to follow suit these days, BSB is more focused on the stock, street bike rule whereas WorldSBK has more evolution in electronics and development of the production machines.”

What is your favourite circuit on the WorldSBK calendar and which do you think will suit the YZF-R1 the best?

“Phillip Island! I like everything about the circuit, the area and the country, and we always have a great time at that event. It’s the first one of the year and the first bit of sunshine after the British winter, it’s a long way to travel but with the test before the race weekend you’re there for quite a while so you get used to it. For the YZF-R1 it’s the same answer. The characteristics of the track suit our bike very much with its flowing nature and the rider comments were very complimentary with the development made so far.”

What are your reflections of the opening two rounds of WorldSBK competition in Australia and Thailand for the Pata Yamaha Official WorldSBK Team and how did the two differing venues affect the bike and the riders?

“Phillip Island wasn’t a surprise in terms of how the bike would handle the layout, we knew it had the potential to be good there, but Chang was actually a nice surprise. With the bike being so new we didn’t have any data to go on and were concerned about how it would perform in the high temperatures, as it’s incredibly hot and humid there, but the YZF-R1 handled the cooling better than expected and the modifications predicted weren’t necessary. This means we already have a good base ready for future rounds like Malaysia so it’s a definite positive going forwards.”

What are your thoughts going in to the championship’s first European round at Aragon and what preparations are needed?

“There is a lot of behind-the-scenes work needed to prepare for the first European race of the season. For the flyaway races you have to keep everything to a minimum, in terms of freight weight, but for Europe it’s the full showcase – race truck, hospitality unit and permanent garage structure. We’ve all had that extra bit of preparation time to fine-tune parts based on the feedback from the first two races. Being such a new project, time is the most important commodity and even those extra couple of weeks are vital – allowing the R&D team to prepare parts etc. – but performance-wise we just need to keep working as we are, as a team, and progressing race-by-race.”

The Pata Yamaha Official WorldSBK Team’s next race is scheduled for Saturday 2nd April at Motorland Aragon in Spain.