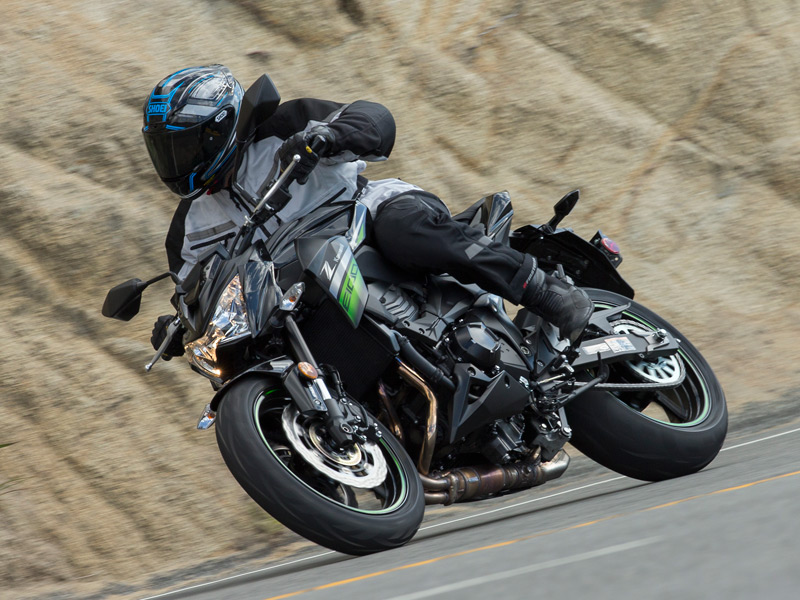 The Great Recession of 2008 cast a long shadow over the American economy. The “new normal” is now almost 8 years old and we continue to “do more with less.” Through hard work and ingenuity, productivity has continued to climb and unemployment has fallen, but real wages remain flat. These days, every dollar needs to go as far as possible.

Motorcycle manufacturers—driven by the demands of the global marketplace—have provided some relief. They’ve devoted considerable resources to the sub-$10,000 motorcycle segment, churning out dozens of new models over the past several years, everything from small-displacement sportbikes to adventure tourers, stylish cruisers and retro standards, café racers and scramblers. Naked sportbikes, long shunned by American buyers who have a penchant for plastic, have enjoyed a resurgence with the likes of the fast and affordable Suzuki GSX-S750, Yamaha FZ-07 and Yamaha FZ-09. 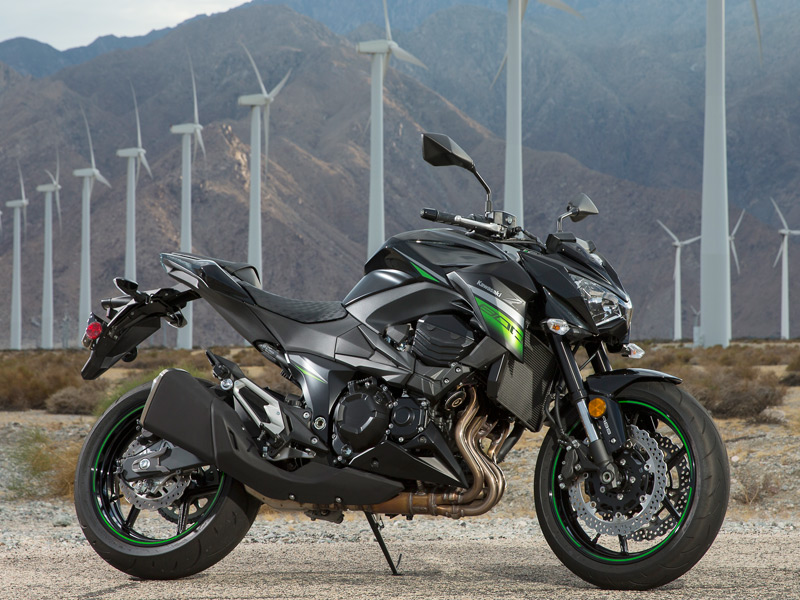 The Z800’s streetfighter styling is angular and aggressive but not as radical as that of its big brother, the Z1000.

Not wanting to miss out on a rising tide, Kawasaki decided to import its Z800 ABS to the U.S. for 2016. The original Z750, which was introduced for 2003, was the best-selling Kawasaki model in Europe for years, with 160,000 units sold over 10 years. A ground-up redesign for 2013 included all-new styling, a larger-displacement engine and other improvements.

At the heart of the Z800 is a liquid-cooled, DOHC, 16-valve, 806cc in-line four, with fuel forced into each of the 71 x 50.9mm cylinders through 34mm Keihin throttle bodies and ultra-fine injectors. Two different-length intake funnels optimize airflow across the rev range. Power is sent to the rear wheel through a cable-actuated wet clutch, 6-speed transmission and chain final drive. Spent gasses exit through an exhaust system designed to boost low to midrange response and centralize mass, with long, curved header pipes connected by equalizer tubes that lead to an under-engine pre-chamber, an exhaust valve and a stubby silencer on the right side. 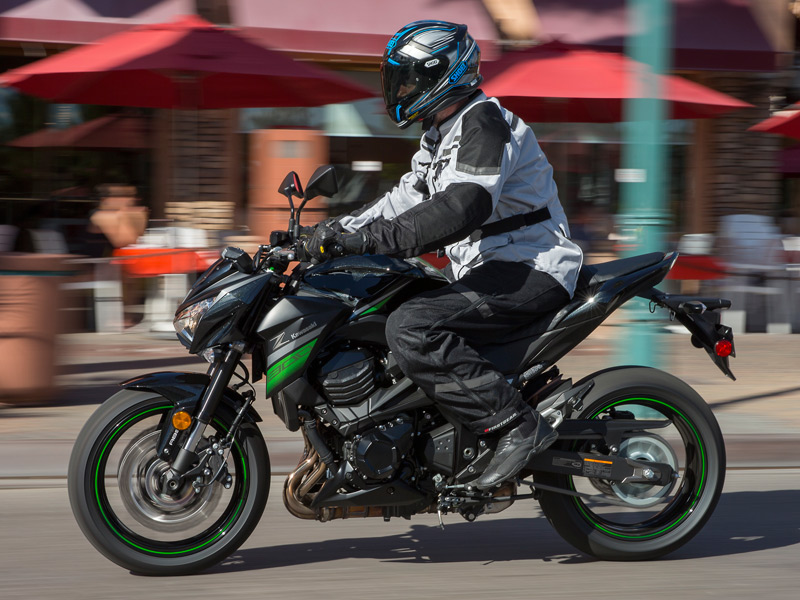 The Z800’s fairly neutral ergonomics are great for urban riding or commuting, but the 32.8-inch seat height will be too tall for some.

The Z800’s claimed curb weight is rather porky at 509.4 pounds (by comparison, claimed weights are 414 pounds for the Yamaha FZ-09 and 463 pounds for the Suzuki GSX-S750), due in part to its high-tensile steel backbone frame and steel swingarm, which are solid but heavy. Suspending the bike are a 41mm KYB upside-down fork and Kawasaki’s Bottom-link Uni-Trak rear suspension system with a horizontal KYB piggyback-reservoir shock. The front and rear suspension are adjustable for spring preload and rebound damping, with 4.7 inches of travel in front and 5.4 inches out back. Brakes are by Nissin, with a pair of 277mm petal-style front rotors squeezed by opposed 4-piston calipers, a single 216mm petal-style rear rotor squeezed by a 1-piston caliper and standard ABS.

To give the Z800 ABS a shakedown ride, Kawasaki invited us to Palm Springs, California, for some urban riding and canyon carving. Our 140-mile route included a cruise through posh mid-century modern neighborhoods, 20 miles of stop-and-go traffic and a blast up and down the Palm to Pines Highway (State Route 74), one of Southern California’s premier motorcycle roads. It snakes its way up from sea level in Palm Desert to nearly 5,000 feet as it approaches Idyllwild in the San Jacinto Mountains, with countless well-paved curves in between. 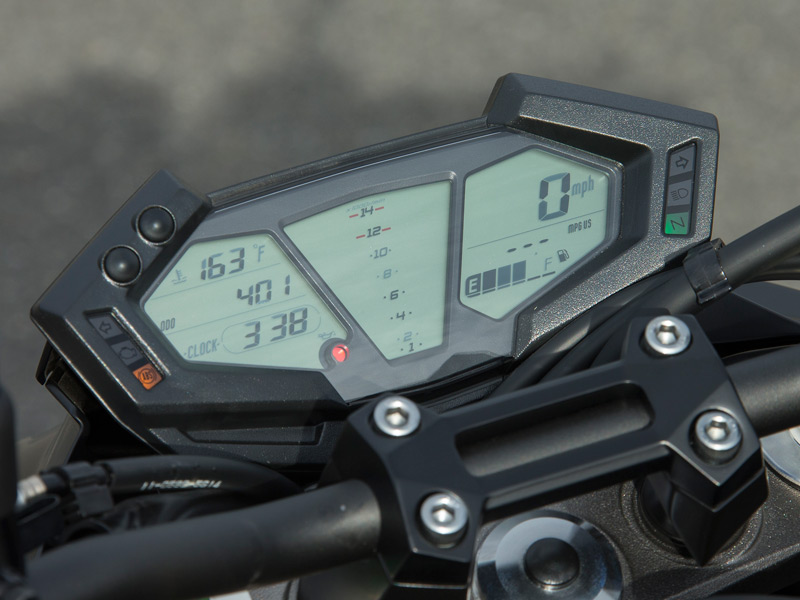 A unique three-screen LCD instrument panel has a customizable tachometer in the center and detailed info on each side.

The Z800 fires up crisply and precisely, just as one would expect of a modern Japanese in-line four. Its exhaust note is not particularly unique and the engine character is plain vanilla. With a traditional cable-actuated throttle and well-metered fuel injection, the connection between the right grip and the engine is direct, with smooth, linear response. Shifting through the gears is a breeze, and the bike leaps forward with Goldilocks power—neither too little nor too much, but just right. Engine heat wasn’t an issue (even though I was wearing full mesh gear on a hot day), but vibration increased through the grips, seat and pegs as revs got higher. A combination of rigid and rubber engine mounts are used, with the front engine mounts located behind the cylinders to reduce engine vibration, but more could be done to damp the buzziness.

At 6-foot, 2-inches, the Z800’s ergonomics suited me just fine, with a tallish 32.8-inch seat height (non-adjustable) affording good legroom and a modest reach to the upright handlebar that put some weight on my wrists and bend in my back. Despite its weight, the Z800’s wide handlebar, short wheelbase (56.9 inches) and sporty geometry (24 degrees of rake, 3.9 inches of trail) give it nimble handling. The bike’s good suspension, strong brakes and grippy Dunlop Sportmax D214 radials on six-spoke, lightweight cast aluminum wheels are right in line with expectations for the sub-$9,000 price segment. 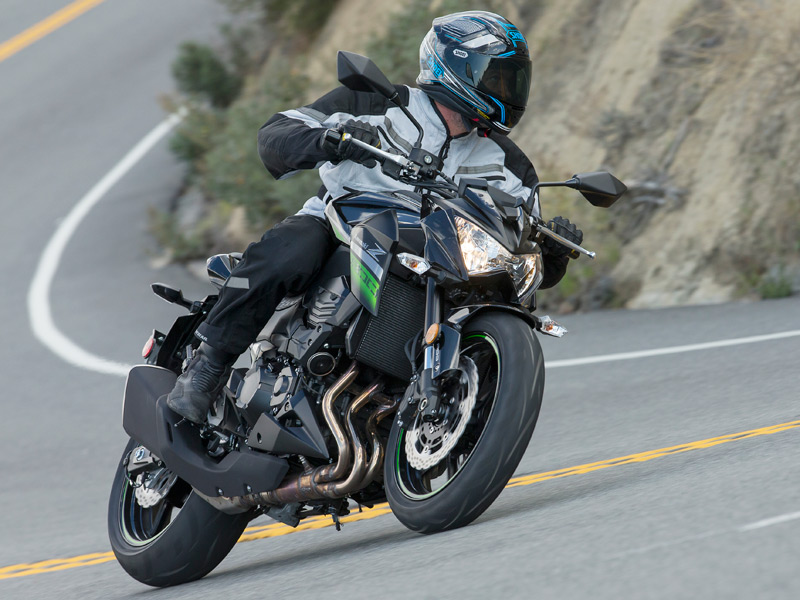 Although the Z800 is heavy at 509 pounds, its short wheelbase and sporty geometry give it nimble handing.

Although not as extreme as its “sugomi”-styled big brother, the radical Z1000, the Z800’s styling is aggressive and futuristic with lots of sharp angles in its bodywork. Front and center is a three-screen LCD instrument panel, with a central vertical bar tachometer (the appearance can be customized to three different settings) and screens on either side displaying speed, fuel level, clock, engine temperature and various fuel economy and trip/odo functions, but there’s no gear position indicator. Nice touches include the Z-pattern seat cover and LED taillight, passenger handholds integrated in the tail section and multiple luggage hooks.

With more than a decade of development under its belt in other markets, the new-to-America Z800 ABS is a solid performer with few rough edges and a good value for these fiscally conservative times. It could stand to lose some weight and cut down on vibration, but neither issue is a deal-breaker. Riders with short inseams will find the 32.8-inch seat height a challenge, an unfortunate limitation for a motorcycle that’s an ideal step-up from a smaller bike. At $8,399 with standard ABS, it’s right in the hunt price-wise with its closest competitors, the Suzuki GSX-S750 ($7,999) and Yamaha FZ-09 ($8,190), neither of which is available with ABS. The biggest downside, at least for those of us in the Golden State, is that the Z800 ABS is a 49-state model that will not be available in California. Kawasaki imported the bike with very few changes from its European specification, so it doesn’t meet California’s strict emissions regulations. 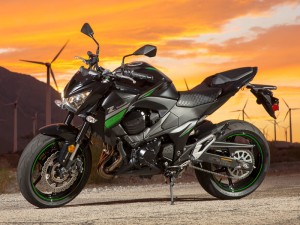 Available in Metallic Spark Black/Flat Ebony only, the Kawasaki Z800 ABS is a 49-state model that will not be sold in California. 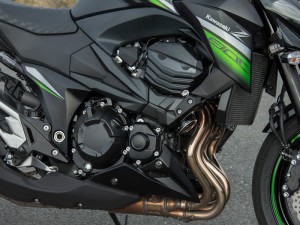 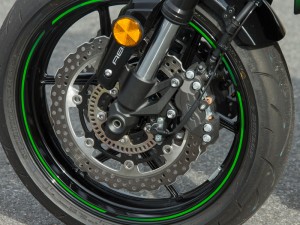 Up front, a pair of opposed 4-piston calipers squeeze petal-style rotors, and ABS is standard.